to enjoy the serene and fantastic views of Tenerife, there are plenty of quad trips options to choose from

Tenerife is one of the most famous tourist destinations in Spain, thanks to its jaw-dropping landscape, awesome cuisines, and fun activities. There are several options when it comes to exploring Tenerife; you can opt for a good old horse ride, a buggy ride, kart riding, or simply quad Tenerife.

However, most tourists prefer to quad Tenerife because of the ease and excitement it offers. When it comes to enjoying the serene and fantastic view of Tenerife, there are three main quad safari options you can choose from:

One of the amazing things about Tenerife is its stunning view of the Atlantic Ocean. You can quad Tenerife and explore the beautiful view of Costa Adeje, discover abandoned fishing ports and harbours such as El Puertitio, visit local coastal villages, beaches, banana plantations, and enjoy the view from the picturesque cliff tops that abound in the south of Tenerife.

You may even take a refreshing dip in the ocean and try out the exquisite Canarian Tapas! The ocean quad excursion is one of the favourite ways for most tourists to quad Tenerife.

The Forest Quad tour in Tenerife is another popular way to quad Tenerife. This trip gives you all the thrill and adventure of taking a quad trip in Tenerife. The forest quad takes you off-road, far away from the droves of tourists into the magical virgin pine forest. This trip starts at Playa De Las Americas and proceeds through the picturesque villages of Arona and Escalona, it runs through the dense pine forest, and then heads towards the historic village of Vilaflor, which is not only the highest village in Tenerife but also in Spain. You can also make stops at a local bar or restaurant and refresh with a local Canadian meal or drink before heading back to Tenerife.

The quad trip starts from Playa De Las Americas, running through Arona and Escalona into the magnificent pine forest. You may most likely take a short break at a local restaurant in Vilafor before heading to the fascinating landscape at the bottom of the volcano at Mount Teide known as “Boca de Tauce”. You can also enjoy the intimidating view of Mount Teide, which stands at 3760 metres as the highest peak in Spain.

Whether you’re a first-timer or a veteran, we guarantee you an enjoyable experience. Our qualified instructors are always on hand to help you out whether you are driving on-road or off-road. Plus, we’ve got the best fleet of quad bikes in Tenerife. Touring Tenerife has never been more fun! 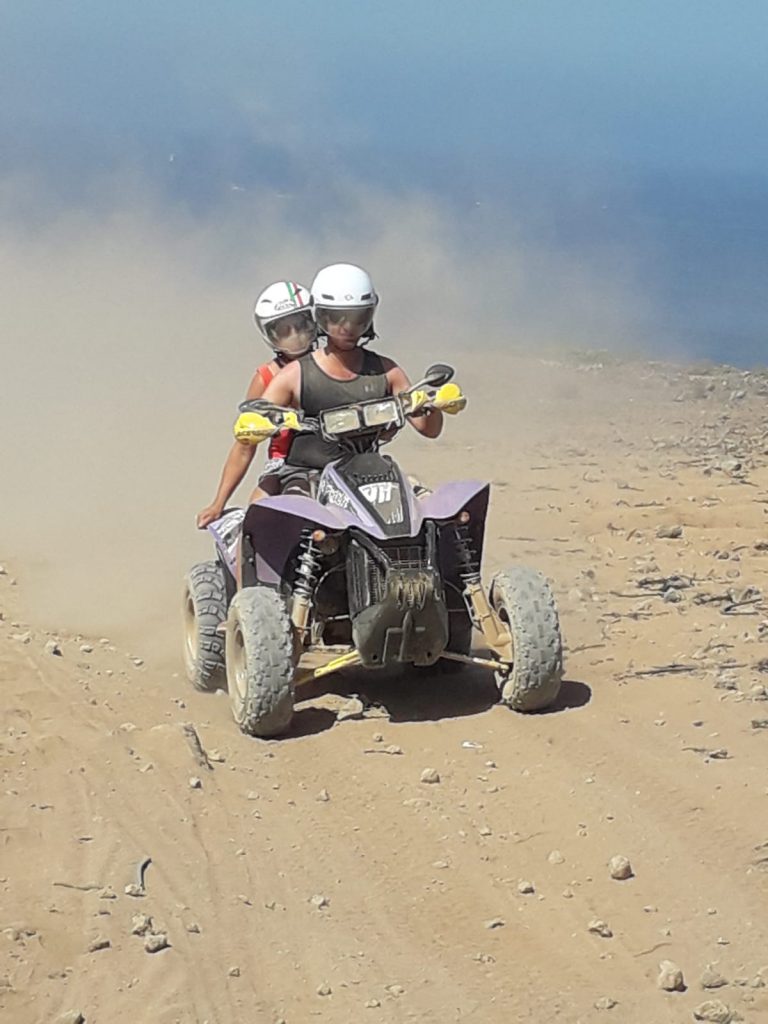 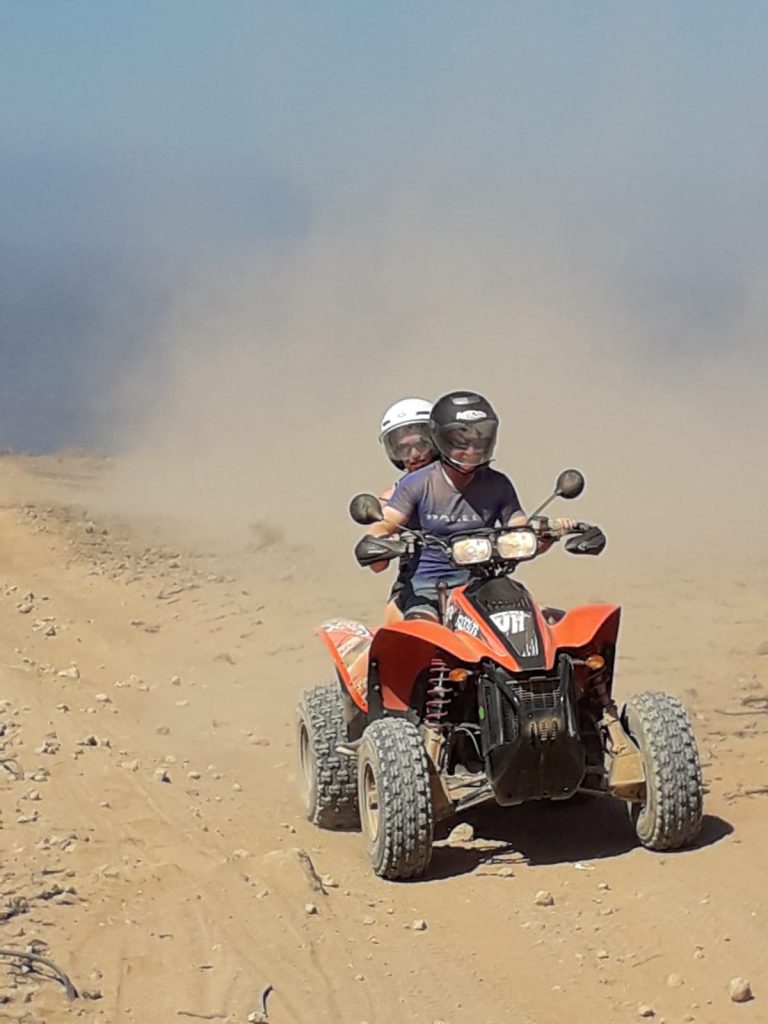 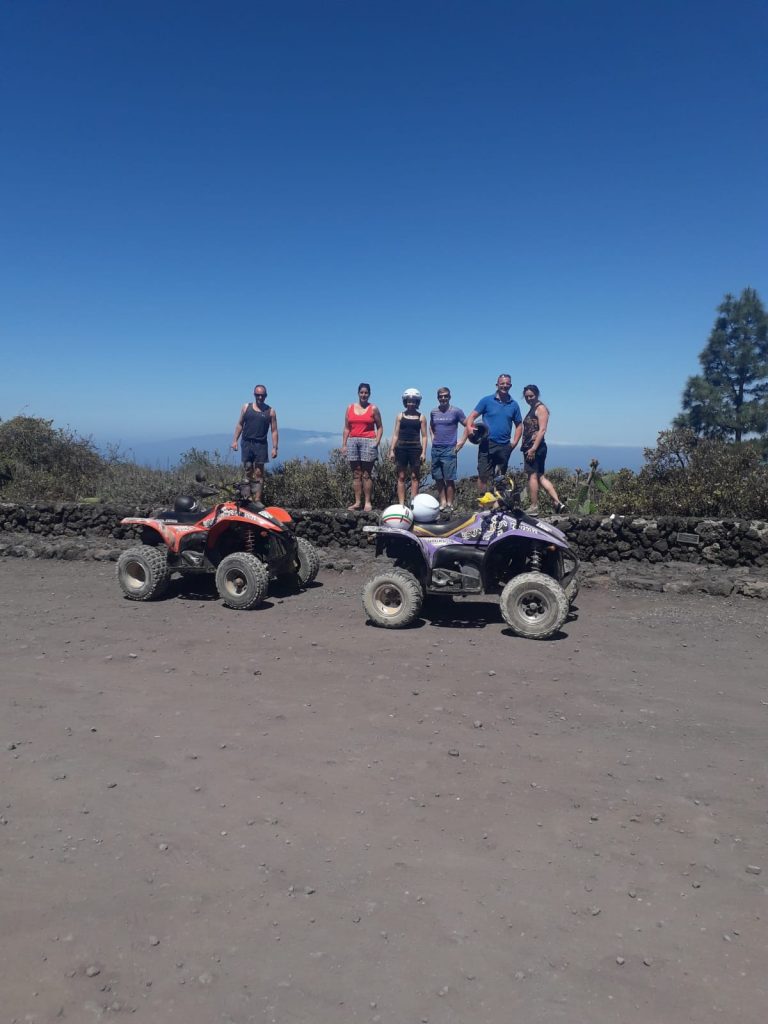 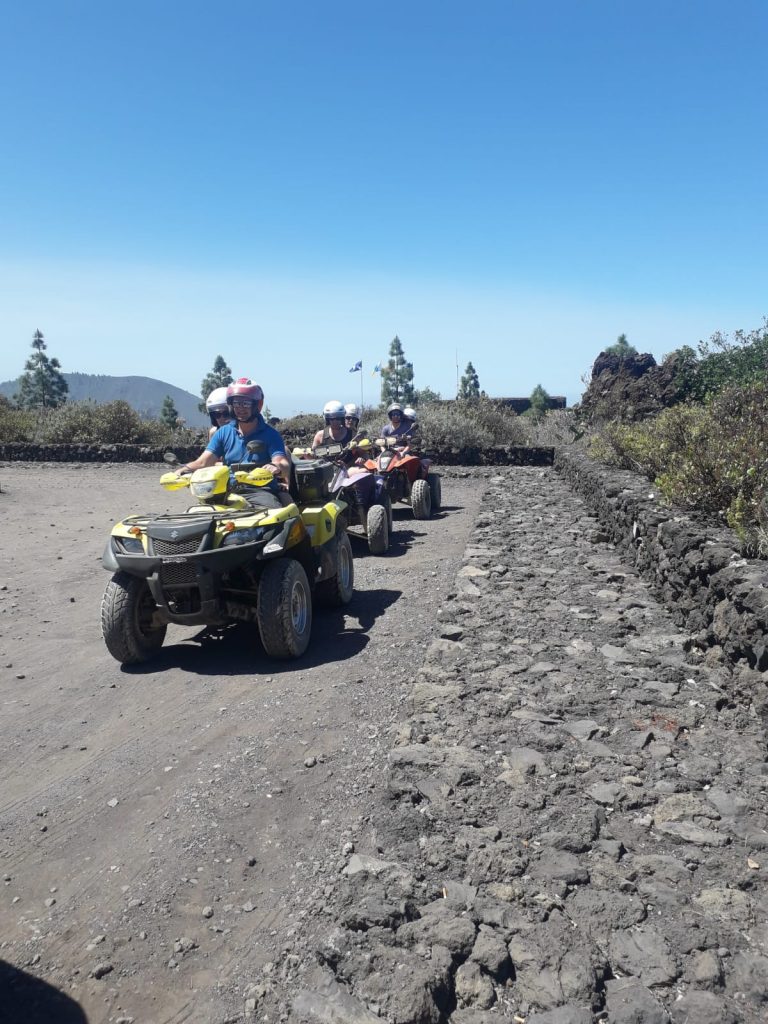 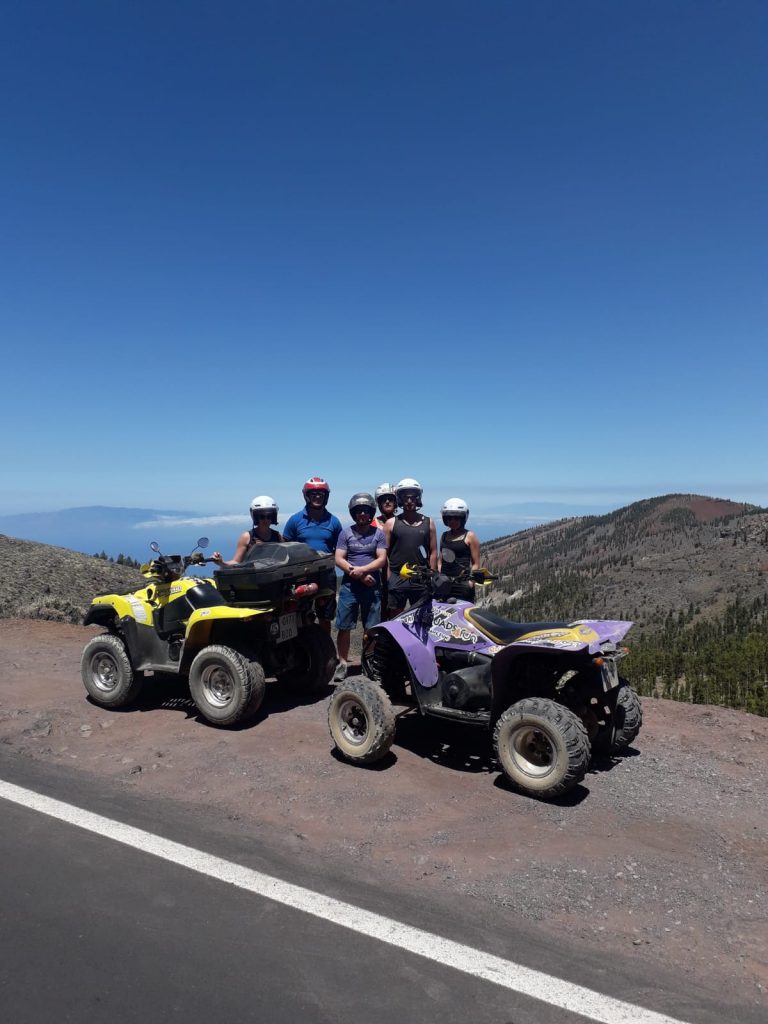 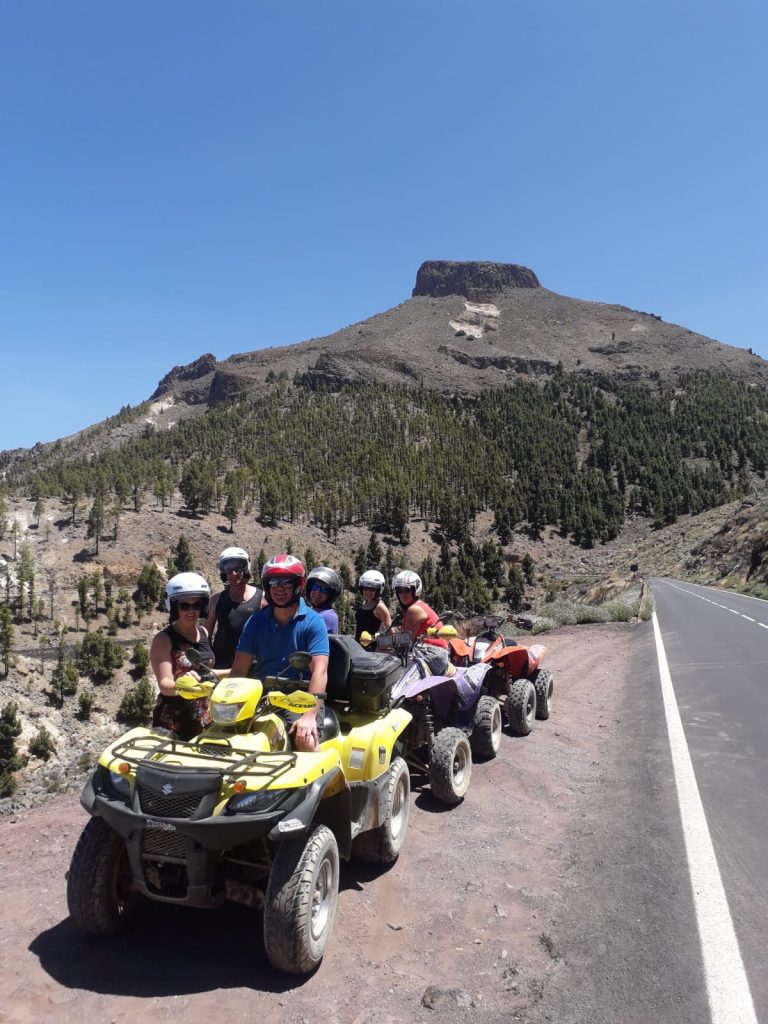 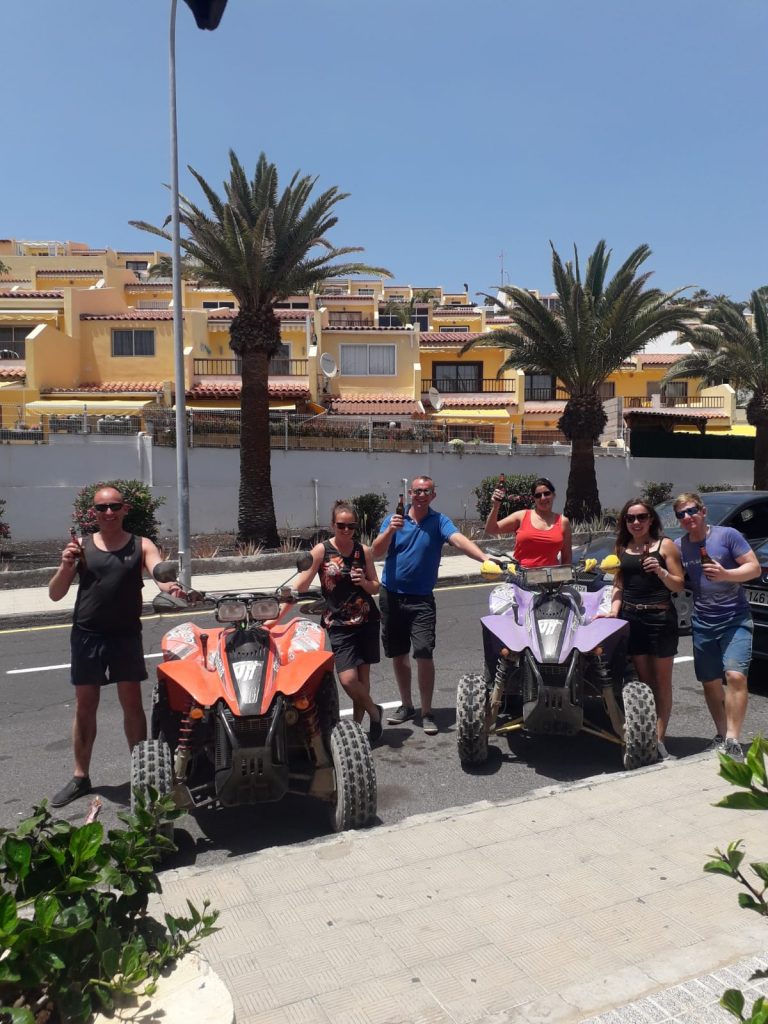 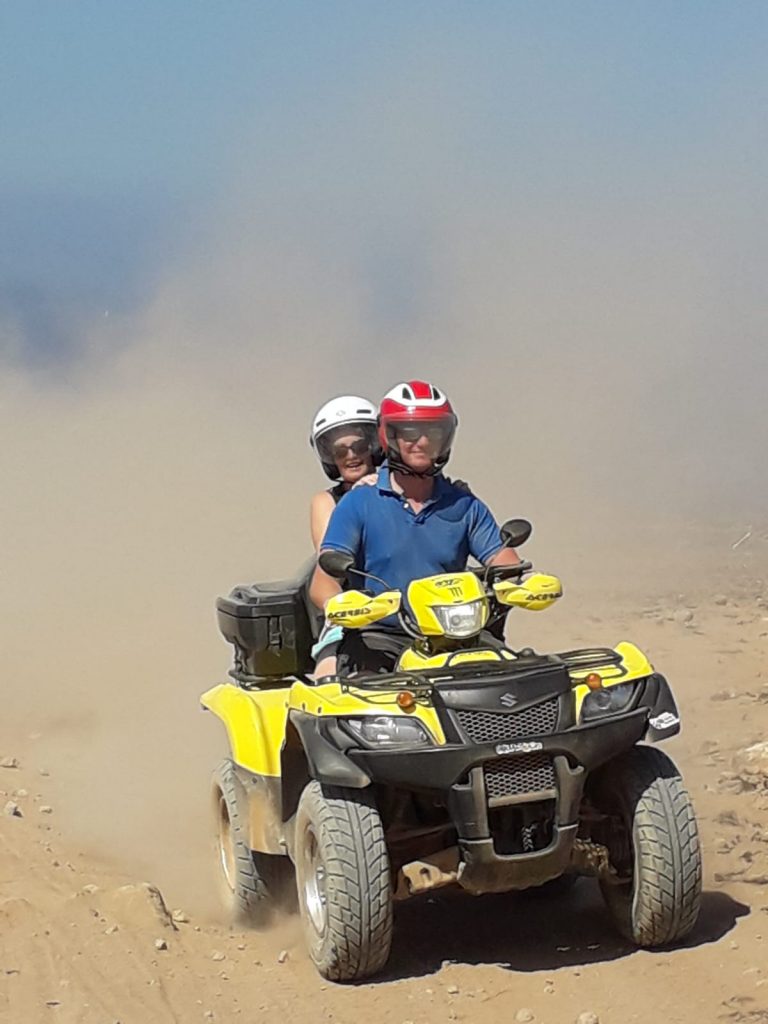 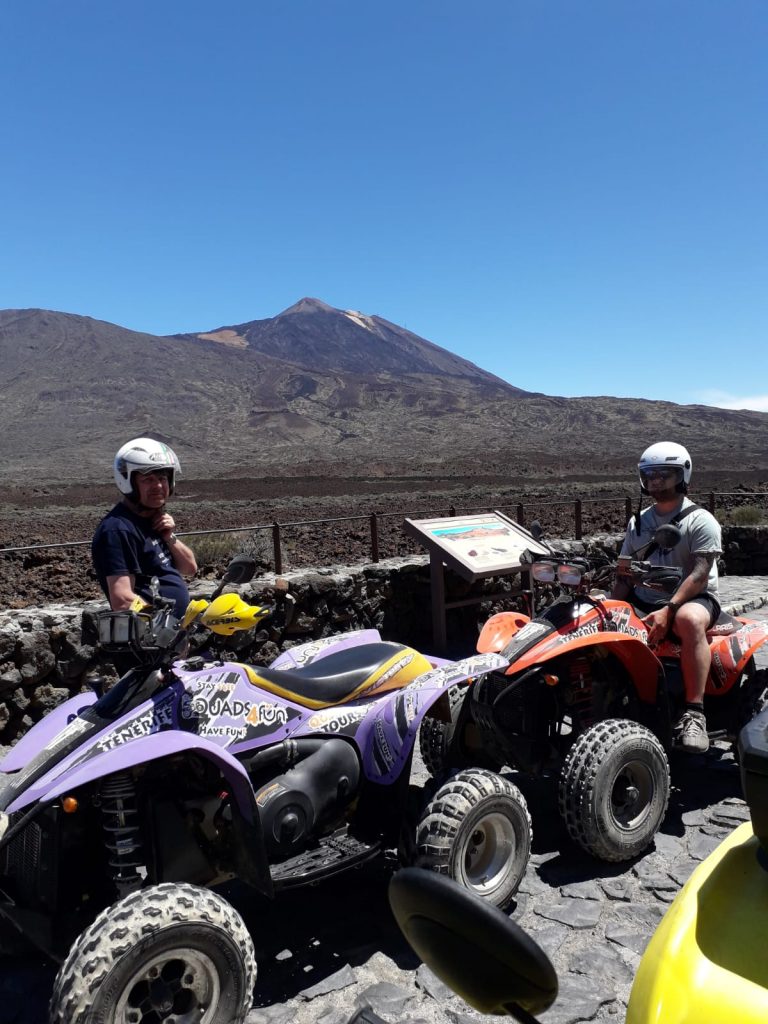 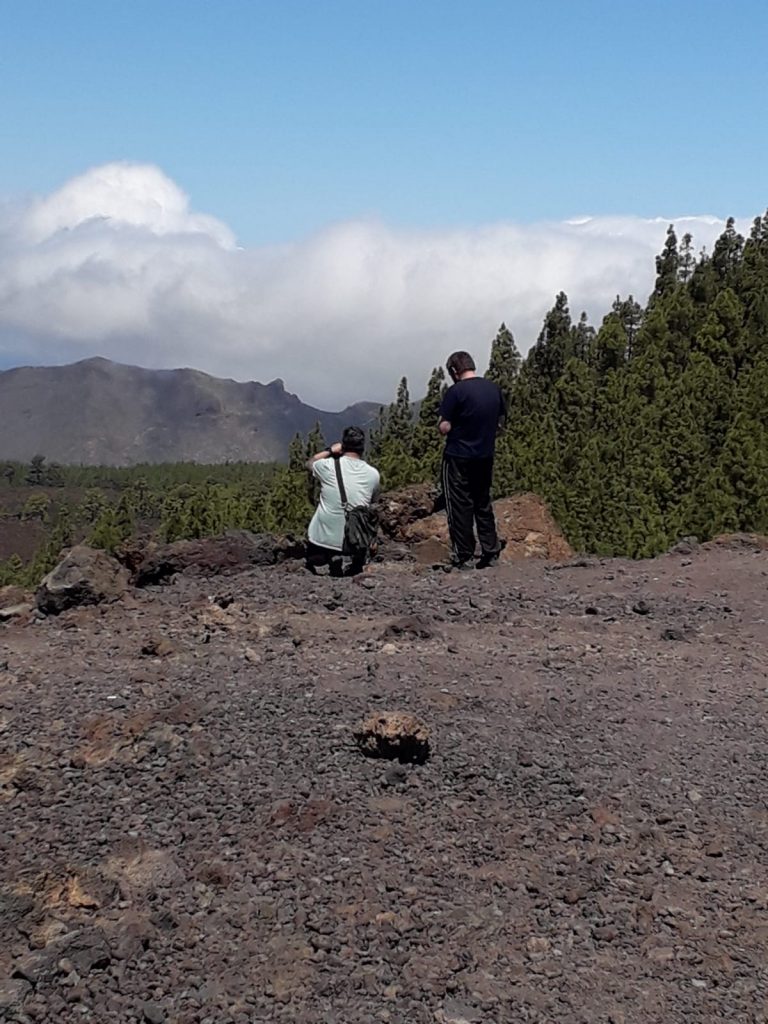 For an extra 10€/day you get extended insurance with a maximum liability of 1000euros.

All Tenerife Pick-up and Drop-off

For an extra 75€ (up to 4 people) we will pick-up and drop-off from Tenerife North Airport, Santa Cruz de Tenerife or Puerto de la Cruz areas.

Ocean views, pine trees and villages will roll out as you are ride into the Sunset. We  call this tour the Romantic Quad Explorer because all riders will fall in love with nature 🙂

Join us for a Forest Quad Trip and let’s go off the beaten paths and explore the ins and outs of Tenerife through virgin pine forests and well above the clouds.

Maybe you’ve seen it, maybe you’ve hear about it but you definitely didn’t explore it in the right way. We guarantee an unforgettable experience in the most visited park in Europe:)

Join us a typical Canarian lunch during the quad tour in our favorite restaurant far from the touristic areas; the menus are suitable for both vegetarians and meat lovers.

Enjoy a quad safari that will take you next to the majestic waves of the Atlantic Ocean. Discover abandoned fishing ports and try the authentic Canarian Tapas

Explore the secluded villages and fantastic ocean views of the Tenerife’s South Coast. After the quad experience we have prepared an authentic Canarian Tapas tasting menu.

Ride above the clouds!

Drive through virgin pine forests, lava fields, off the beaten tracks and secluded villages. Once above the clouds you will enjoy endless views of the surrounding islands and ocean.

Selected Quad Tours will stop at some of our favorite restaurants where we have prepared lunch and dinner menus for the riders.